Apples. Beautiful apples! They look pretty as home decor, and I think they’re absolutely the best fruit to cook with! Maybe I should confess that I really don’t like cooked fruit, and about the only fruit pie I’ll eat is apple pie. I do like peach cobbler however. Today is Farmhouse Friday and we’re celebrating apples and all their wholesome goodness! I’ve got a tasty Baked Apple Chips recipe for you! 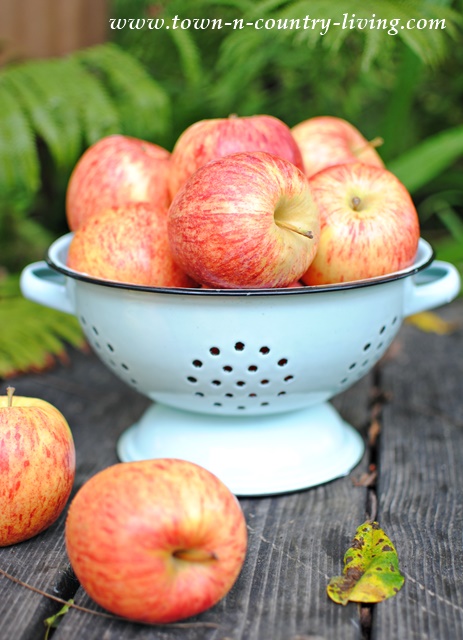 Apple season officially began here in northern Illinois on August 22nd, because that’s when the local apple orchard opened to the public for apple picking! My favorite are Gala apples, which I’ve stuffed into my aqua colander.

The apple picking orchard is just a few miles down the road from our house. That’s one of the great things about living where the ‘burbs of Chicago end. We have all this beautiful countryside to the west filled with the fruit of the earth. There’s a nearby vineyard too, complete with a winery and award-winning wines. I’ll have to take photos of those beautiful grapevines sometime soon. 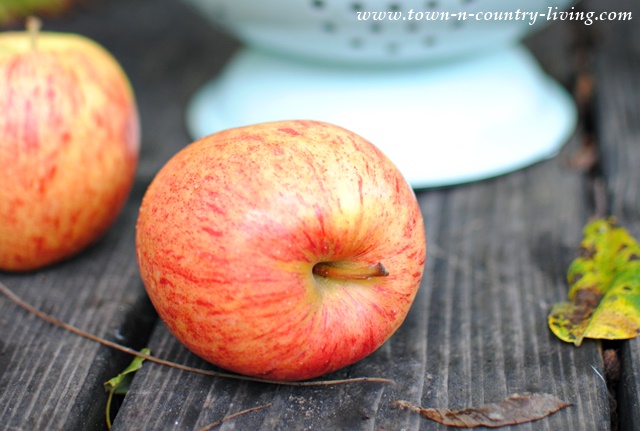 But back to the apple … I’ve wanted to make Baked Apple Chips for the longest time and never got around to it. So I started researching a few recipes, took the best of what I learned, and now I have a tasty recipe to share with you. 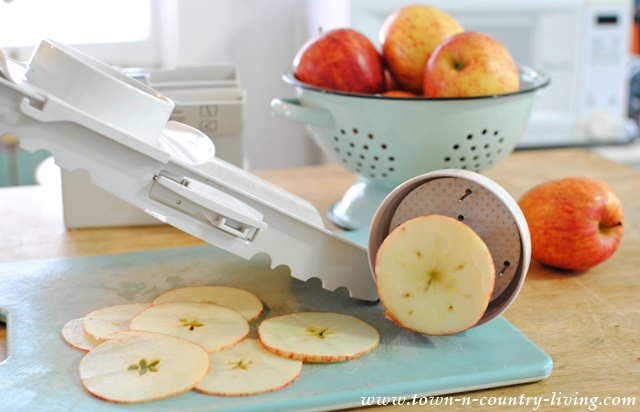 About a year ago I bought a mandolin (the slicer, not the musical instrument) and never used it. So I hauled it out to slice my apples. I’ve never used a mandolin before but it was really easy and I don’t know why I was always afraid of it! 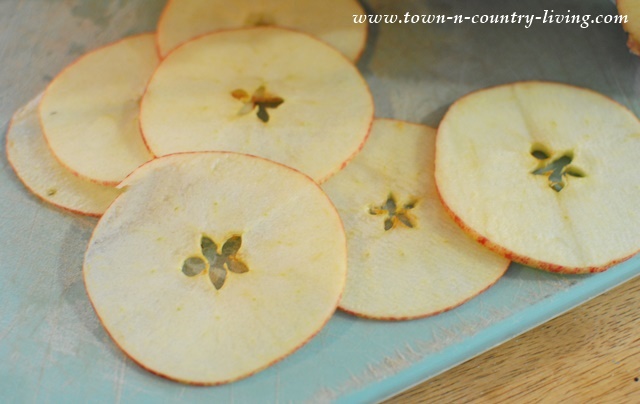 I didn’t core the apples first. And I’m glad I didn’t because I ended up with these pretty little stars in the middle of the apple slice. The seeds pretty much get sliced right out. If they stick to the slice, just flick them out with your finger. 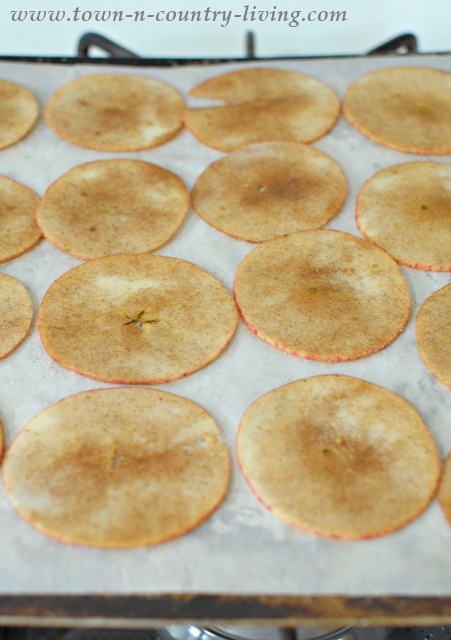 After slicing, I lined a couple cookie sheets with parchment paper, which keeps the apples from sticking after baking. I mixed sugar with cinnamon and dipped each slice into the mixture (both sides) and lined the slices on the sheet. I didn’t measure the sugar or cinnamon, I just tasted it to make sure there was enough cinnamon flavor. 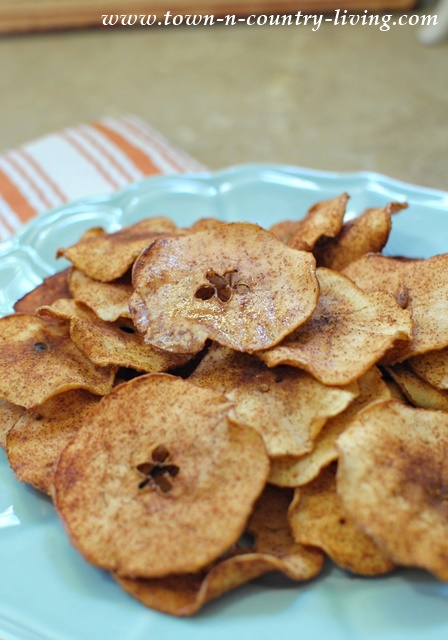 After preheating the oven to 200 degrees, I baked the chips for an hour. Then I flipped them over and cooked them for another hour. Let them cool for just a minute or two before removing from the parchment paper. As they continue to cool, they’ll get crisp. 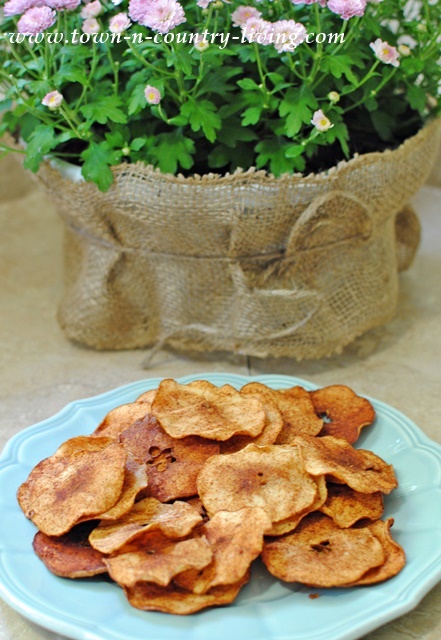 Baked Apple Chips are so good and in my opinion, are a better snack than potato chips. The thinner the slice, the crisper the chip. Give these a try … if you like apples, I’m pretty sure you’ll love these!

Don’t forget to visit my Farmhouse Friday friends at the links below to see what apple goodies they have in store for you!

And one more thing before you go … I have a winner of the Mason Jar Crafts for Kids book!  Congratulations to Hilary (comment #5) who will use the book for her kindergarten classroom! 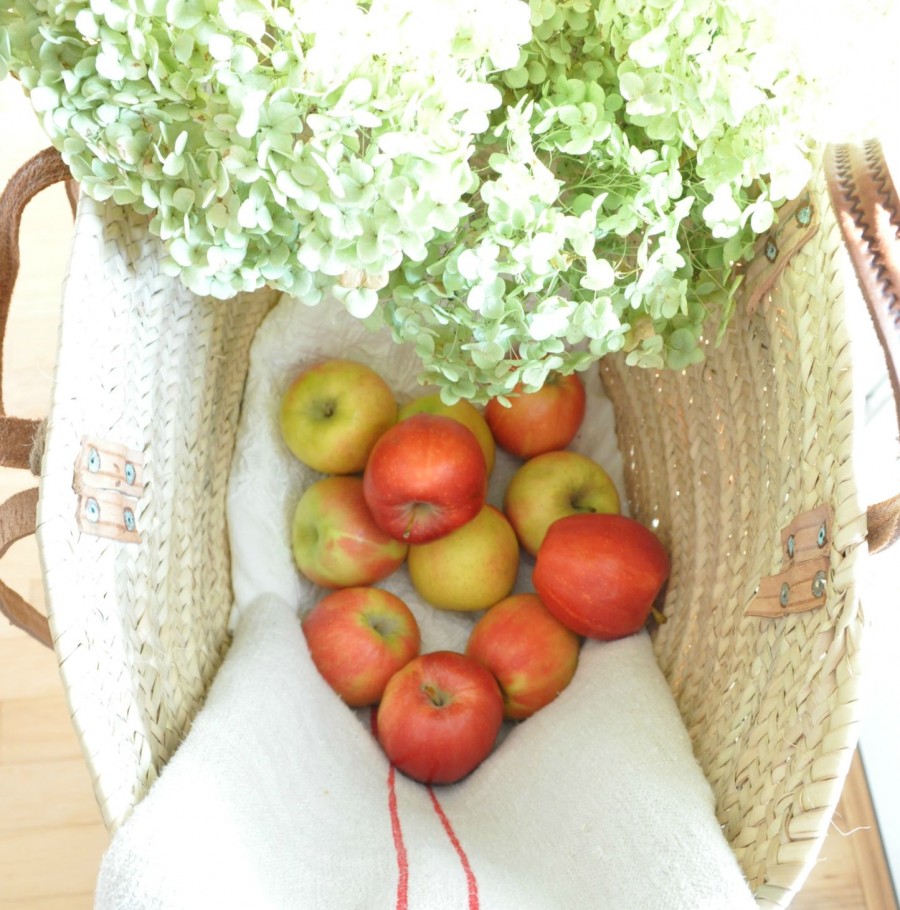 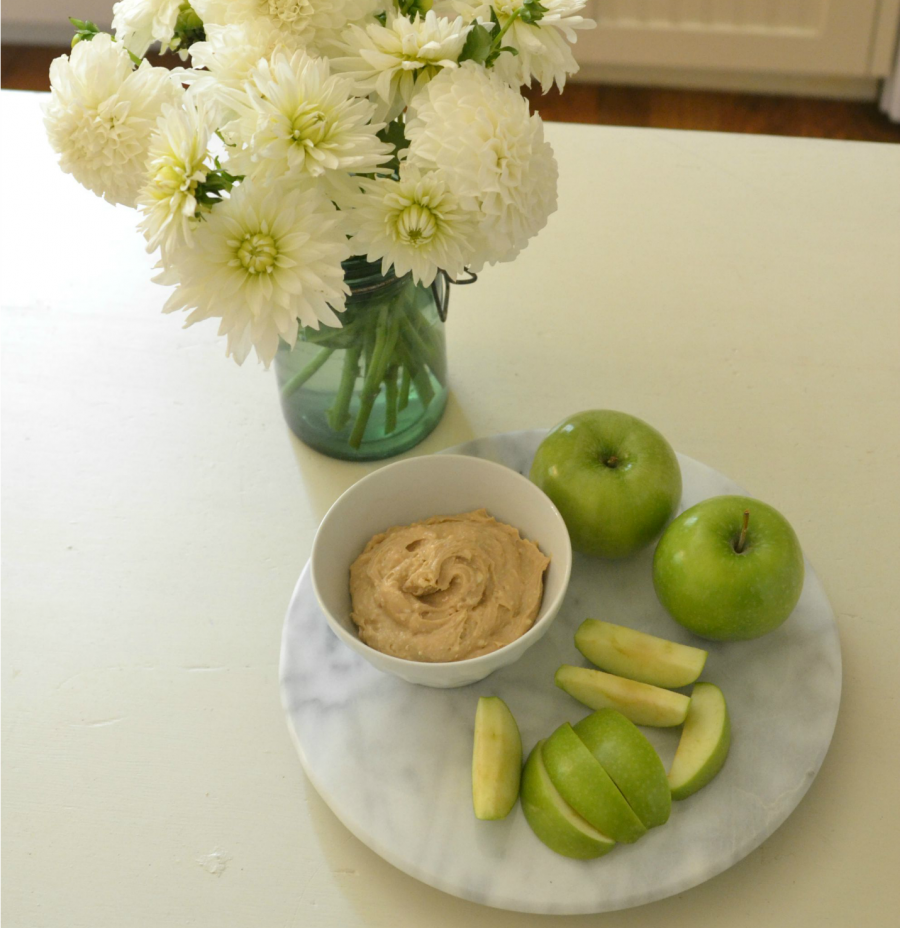 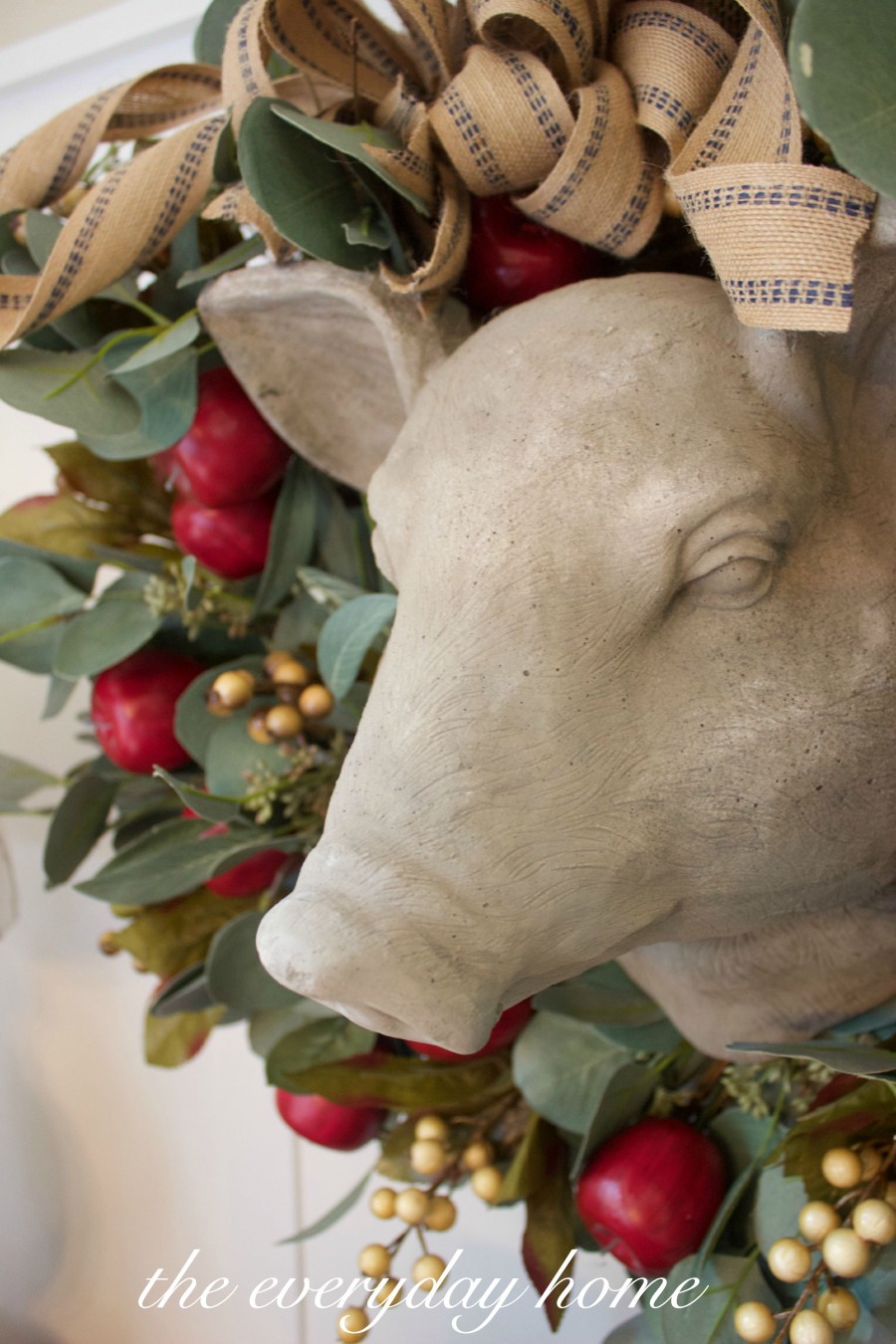 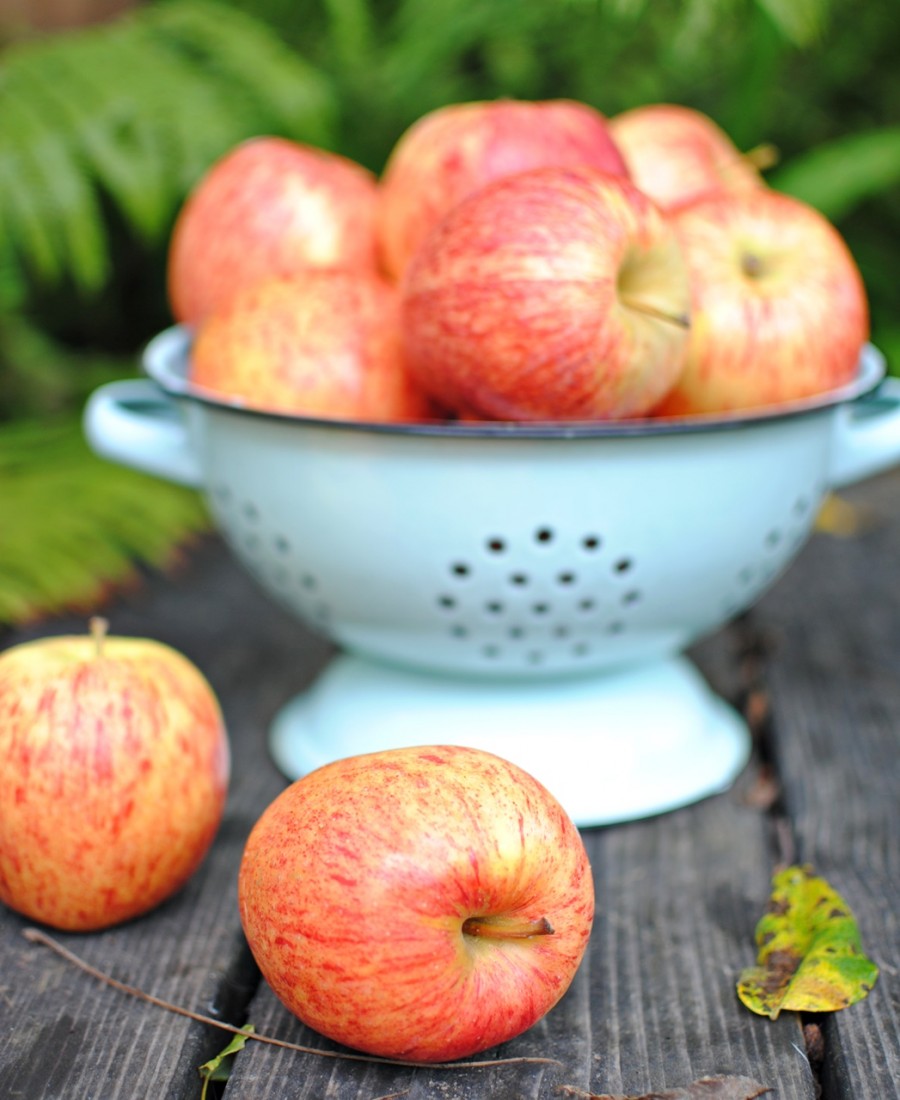 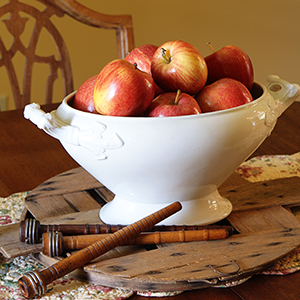