Yesterday my daughter and I went shopping in Dekalb, home to Northern Illinois University and the birthplace of barbed wire. Since it’s a university town, it has its share of little boutiques and an eclectic coffee house complete with stage for local performing artists. Bridget was looking for Boho style curtains and I was on the hunt for ironstone and mirrors. After returning home, I realized the ironstone makes a perfect backdrop for vintage Valentines. 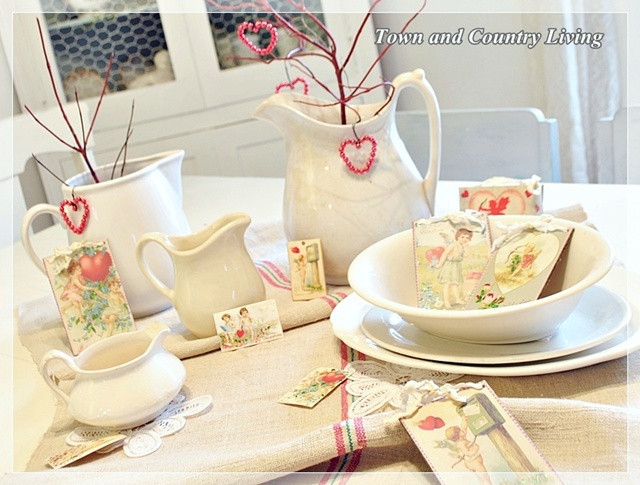 The pitcher on the right has crazing and discoloration so I got it for a song.
Honestly, I like the flaws on this piece – it’s a reminder to embrace life’s imperfections. 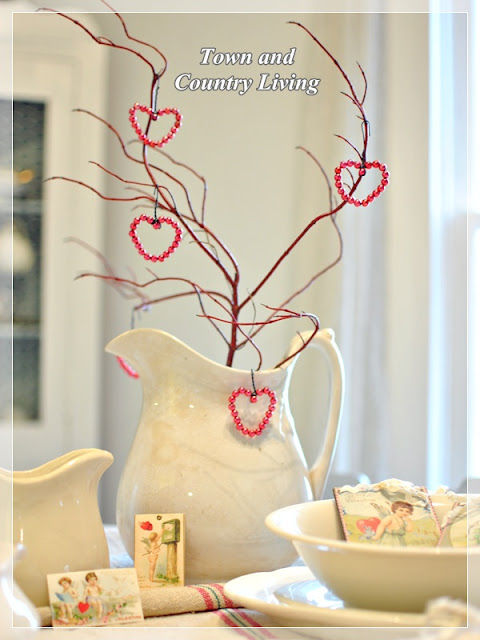 Speaking of life’s imperfections, I was nervous about our recent photo shoot for Country Sampler.
Worried that all the flaws of our 1875 home would stick out like a sore thumb.
Worried that the photographer would think he’d made a big mistake when he walked through the door. 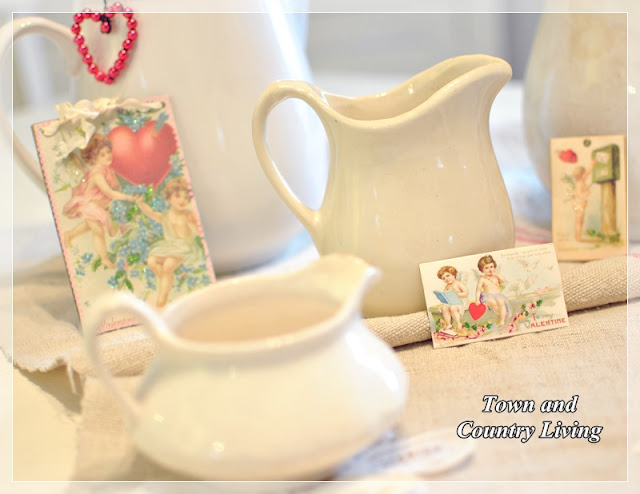 But he and his stylist (his charming wife) were ever so gracious and complimentary.
The photo shoot took the entire day and it was a pleasure to watch a pro in action.
They didn’t move things around as much as I thought they would.
And luckily, our live Christmas tree was still looking healthy after the holidays. 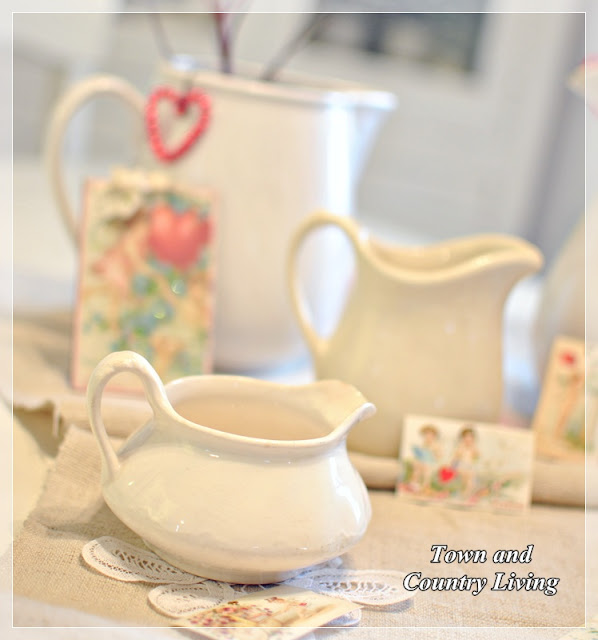 Although I wanted to ask a bazillion questions, I tried to stay out of the way.
Or help with props as needed … like ironing flour sacks so wrinkles didn’t show. 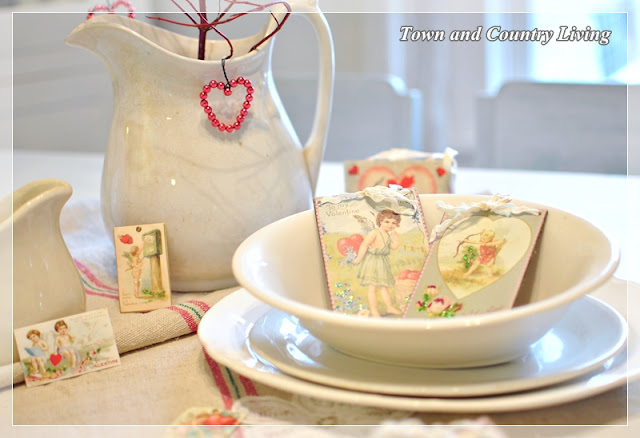 The magazine photo shoot pretty much took all day and once it started I relaxed.
This was due in large part to the laid back personalities of the photographer and his wife.
They didn’t even seem to mind too much when Kitty Albie tried climbing the tripod.
Little Albie was then banished to the bedroom where he took a long nap. 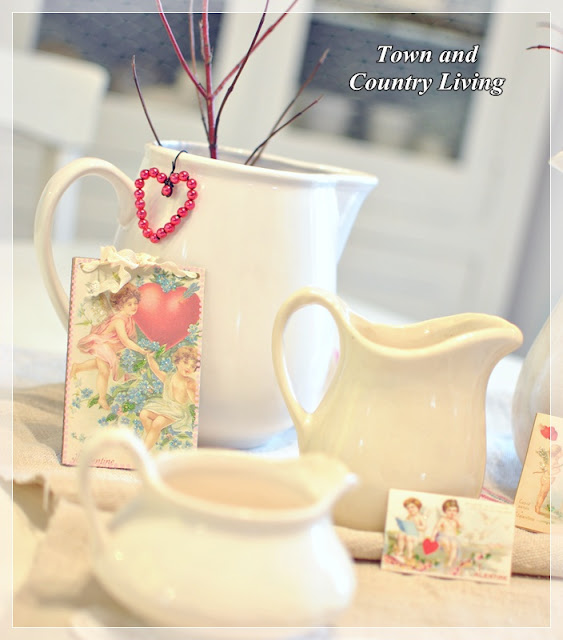 But back to our shopping trip in Dekalb … the pitcher on the left was the first acquisition of the day.
It’s a more modern piece but I like its shape despite that it’s not ironstone. 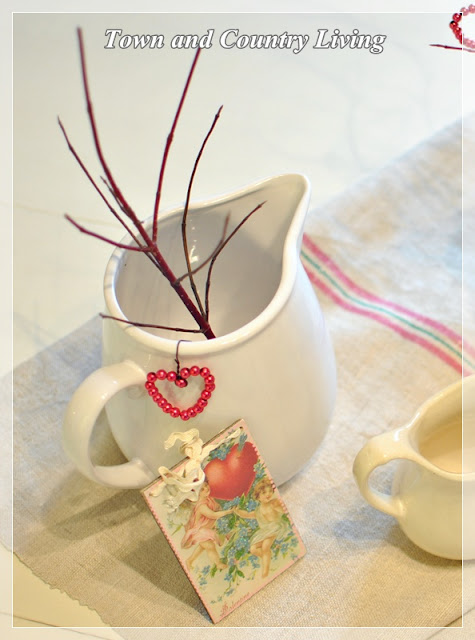 I’m sorry to say Bridget didn’t find her Boho style curtains, but she found some other pretties.
I noticed a trend with Bridget as we continued shopping.
She was repeatedly attracted to country pieces, not Bohemian style finds. 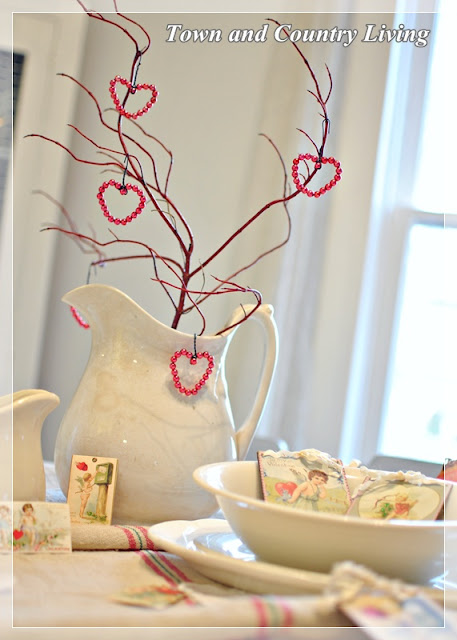 We decided that rustic country is her preference, with just a hint of Bohemia tossed in. 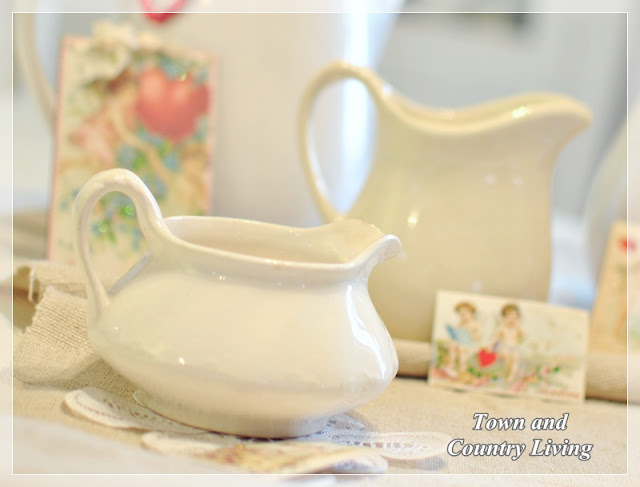 I found this little pitcher for $9 at another store down the street.
I’m trying to build my collection quickly so I’ll have something to put on the new kitchen shelves.
I did find a mirror, too … and a couple of pillows. 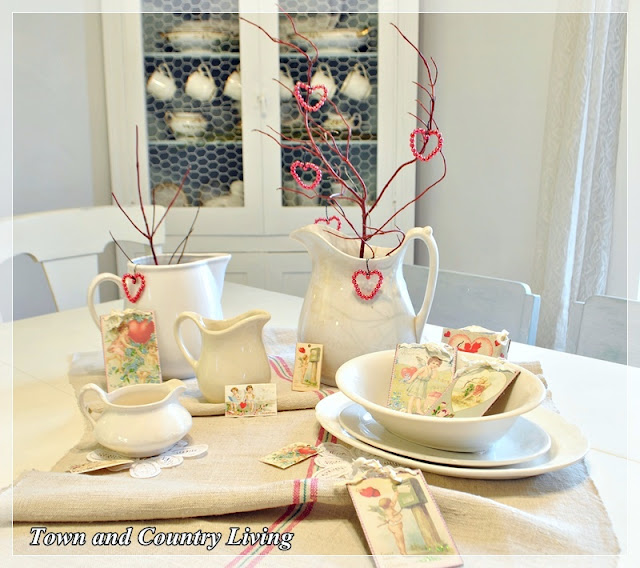 As far as the magazine photos, they’ll probably appear in the 2013 Christmas issue of Country Sampler.
Although, that’s subject to change but the magazine will contact me several months prior to publication.
So stay tuned and I’ll let you know when my imperfect but much-loved home is making its print debut.

Super cute house in Saugatuck, MI. Just got back f

Today on the blog I’m talking about rocking chai

Purple house - yay or nay? When it’s a painted l

The Virginia Bluebells are now in bloom out in the